We are up to the 35th box overall. The Uncle Brett IPA from the previous box was definitely a highlight, with Dust Rings also an interesting sour with a citrus undertone. Let’s dive in to the spring selection…

The sharp summer bite of a sour, smoothed off with the delights of the subtle fruity juicy flavours of passion fruit – looking forward to this one.

Gueuze Cuvée René contains one-third old lambic, aged for at least two years, and two-thirds young lambic, which is at least one year old, matured in large oak barrels called foudres. It is then bottled in a beautiful champagne bottle where a second fermentation takes place. After 6 months, the gueuze obtains a golden colour and is slightly carbonated and tart. Kept in a cellar for a few years, it becomes truly exceptional.

The use of a champagne bottle dates back to an uncertain time period when lambic brewers specialised in recovering empty bottles from great restaurants and other establishments where a lot of champagne was consumed.

This beer can be stored for a number of years in a cool, dark place where its taste will continue to evolve. Lindemans Oude Gueuze Cuvée René was elected the “World’s Best Gueuze” at the 2013 World Beer Awards. Lindemans is one of only eight breweries that, to this day, brew an authentic lambic beer in the Valley of the Zenne near Brussels.

Moa lemon curd sour is an attempt by Henok Fentie, one of the founders of Omnipollo, to piece together the different elements of a beer that his girlfriend would enjoy. It is not for the faint hearted. It is as sour as lemon can be. Incredible, but incredibly sour. Be ready!

A Bretted IPA first fermented with a Saison strain and subsequently inoculated with two different strains of Brettanomyces in bottle. Best shared after a little aging to allow esters and carbonation to develop. This one needs a minimum of a year in the bottle…

A big fruity cherry sour. A nice and simple “does what it says on the label” beer to end the club this time around. 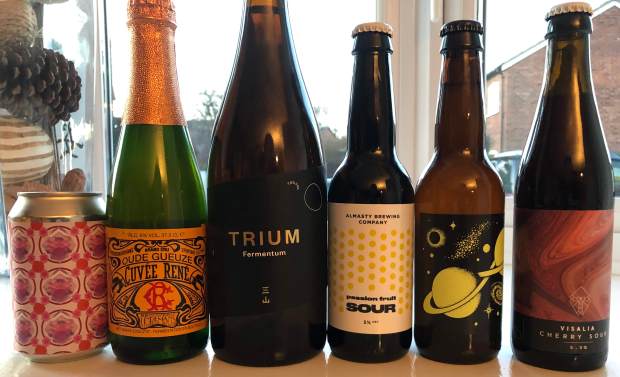