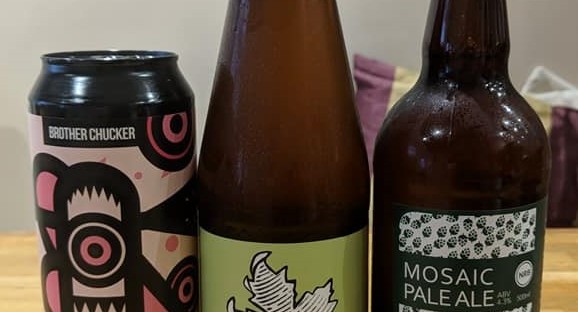 The tenth selection from the craft beer club, and I think the eighteenth overall. The last “main” box came just before Xmas, so let’s see what hoppy delights await this time. Thanks to the Needle & Pin for supplying this month’s photos, my beers were all bundled in with some other deliveries so I didn’t get chance to take the customary photo.

A collaboration with Dry & Bitter Brewing Company and Dugges Bryggeri. The three breweries describe this as the “ultimate crusher”, a tropical juice hop head butt with Magnum, Mosaic, Galaxy, Nelson Sauvin, Citra, Ekuanot and Simcoe all mixed in.

A session IPA blended with mango and pineapple, described by the team as “if Rubicon made beer”.

Named for Marble’s head of sales and his wife, this punchy session IPA is made with a blend of Northern and Southern hemisphere hops. Bright citrus and juicy tropical fruits partner with a subtle malt sweetness.

The other half of the box is below… 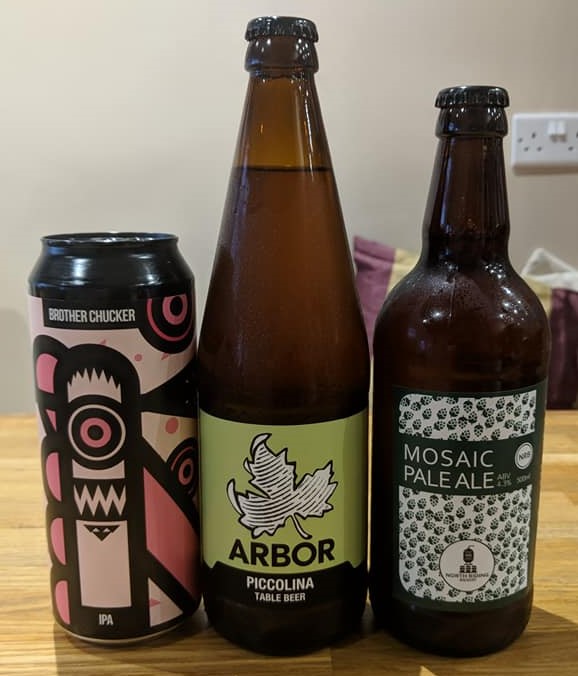 A collaboration with their mates at Basqueland Brewing Project, brewed to remind them of a fun filled week of bikes, beer, baked cheesecake, big smiles and darts in the Basque region. A smooth malt bill featuring Golden Promise, wheat and golden naked oats, alongside a defined bitterness to aid drinkability. They then used lots of lovely piney/citrus Simcoe and limey New Zealand Motueka hops as well as a dash of tropically crazy HBC 438. The beer was fermented with their house WLP001 yeast for minimal aroma/flavour interference and super easy drinking refreshment. Bullseye!

Big flavoured low alcohol session beer, brewed with Vienna malt & oats and Mosaic and Simcoe hops. I’d love to tell you more about it, but that’s all that’s been written about it so far! (Edit : my words are hoppy, crisp, dry and bitter, which makes for a lovely session ale, an easy drinking pint that you could drink plenty of.)

Enter the new kid on the block, Mosaic hops are full of blueberry and citrus flavours and seriously pack a powerful punch to make a juicy banger of a pale ale. (Edit: this was a lovley session pale, so much fruitiness from the hops.)

Given that two thirds of the beers in this box are session strength, I suspect they won’t last very long, as I’m rather lacking in things that aren’t double IPAs or imperial dark beasts at the minute. I think 2018 will be seeing more sessionable brews…