December can be a tricky month when it comes to choosing a beer of the month, because there are often special edition beers knocking around, and there are bound to be some Xmas specials like last year’s beer of the month for December, Christmas Cake Imperial Stout from Cloudwater and To 0l. This year it’s another month where there’s only 1 beer that was drunk in a pub, the rest are bottles and cans sampled at home or elsewhere.

On then to the main event, where we find sours, stouts, IPAs and something a bit different.

An old friend next, Bourbon Oktober by Vibrant Forest Brewery (winner in October 2016). As it has aged, the former liveliness has dissipated but the big flavours are still there.

You knew it wouldn’t be long before Cloudwater came along, so here’s their first in the round up, DDH IPA Amarillo, full of delightful hoppy bitterness, very nice indeed.

Beaverillium by Beavertown is up next, another brewery who have featured reasonably regularly in these round ups. Beaverillium was full of smooth and silky mango, with bitterness and some malt creeping in later on.

Two more Cloudwaters next, a DDH IPA Nelson Sauvin Galaxy which was super smooth and fruity juice with a nice rounded flavour. And to prove that they do other stuff as well, we have our only pub beer, Black Forest, served from the newly installed keg lines at the Needle & Pin. It was a delightful beast, cake in a glass, a festive delight and another winner for #evilkegfilth (yes, that’s an ironic hashtag).

We return to bottles for third place, and a Kentucky Breakfast Stout (KBS) by Founders Brewing Co. This was smoother than a sand blasted smooth thing, big stout flavours with coffee on the nose and chocolate swirling around. No alcohol burn which is often a danger with these big stouts.

We have literally finished off the year with a New Year’s Eve bottle of Serpent by Thornbridge, a suitable celebratory beer, because it’s not really a beer, more of a beery cider, and it feels right for the annual celebration as another year closes.

On then to the winner for December 2017, Double Heathen by Northern Monk, another brewery that have featured a few times in the end of month round ups, but haven’t won since January 2016 (with Eternal their session IPA).

The “normal” version of Heathen featured in May 2017’s round up, and Double Heathen takes that beer to the next level, full of fantastically vicious bitterness, some sweet pine and madly easy drinking for a 10% DIPA. Love it. 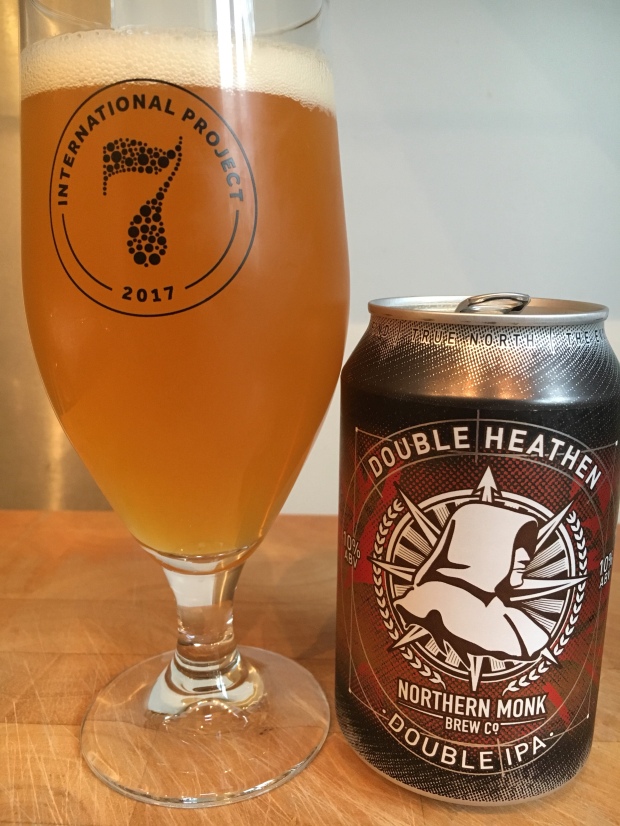 So that’s another 12 months in beer. Now to try and choose the beer of the year.

The traditional New Year’s Eve takeaway. For the first time in a long time, we are not in Ambleside, and not going to Jade Garden, Lucky Dragon, China Cottage, Doi Intanon (on the rare year that it was open on NYE) or Jintana.

Here is a case in point. 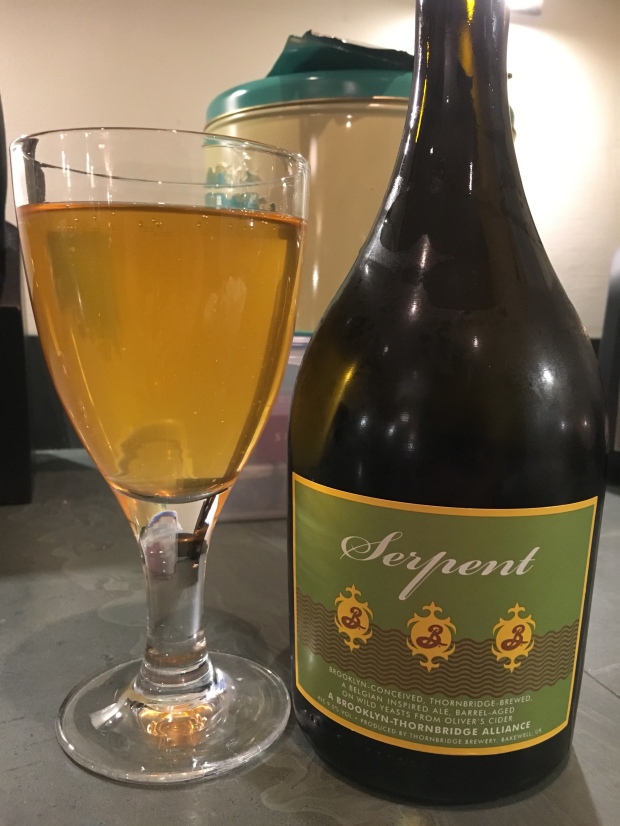 I encountered this beer for the first time on “Thornbridge night” at The Needle & Pin in December 2016. We deconstructed the beer that night, tasting a very sour and tannic Oliver’s cider, a sweet perry, and a meh bourbon. On that night, it tasted like the lees (the leftover bits from fermenting cider, yeasts, skins and whatever’s left) had really dominated this brew, a Belgian style golden ale.

A year on, and it’s even better. So much apple, the beer that’s not a beer.

On to dinner, which accompanied this fantastic beer that’s not beer. A classic starter, satay chicken with peanut chilli sauce. Just to be clear, the satay part is not the peanut bit that you like, that’s in the sauce. The satay part is usually made from lemongrass, shallots, garlic, chilli, ginger, turmeric, coriander, soy sauce, fish sauce, sugar and a few other bits.

The “slaw” bit might not be the most authentic, but it works here with the juicy chicken and tasty peanut chilli sauce.

On to the main event. Chicken gang massaman. The massaman is probably my favourite Thai curry, perhaps because of more peanut. It varies from place to place. I always used to have beef, but too many cheap cuts of steak have left me favouring chicken instead. A very simple one tonight, a few bits of carrot and some chunks of onion,

Simple, but very tasty, and a fantastic way to round out another lovely year of food and drink. Many great meals accompanied by many great beers. 2017 has been a good one.

Keep it simple and you won’t go far wrong. A reasonable mantra for life and certainly for a business. After our aborted visit to the Wheatsheaf Inn, we came back this way, having driven past on our way to the “no food today” pub.

The Lake District Wildlife Park has been around for a while, but we’ve never been, as we are usually out in the hills with the actual local wildlife rather than the imported mandrils and red pandas in cages.

The most handy feature is that they have a cafe that serves food all day, and you can visit the cafe without paying to get in to the park itself, which is nice. Both Mrs MOFAD and I had a ham and cheese panino which comes with chilli tortilla chips and a nice coleslaw (not onion heavy).

Exactly what we wanted for today, well priced, tasty and quick. A friendly little cafe which is handily placed if you find yourself at the top end of Bassenthwaite Lake (the only lake in the Lake District).

We didn’t linger as there was one more Wainwright to ascend for 2017, and we had to get up and down before it got too dark…

This is another one of those “I was going to tell you about it but I can’t” posts.

After our trip up to Dodd this morning (our penultimate Wainwright for 2017), we had planned to have lunch here and then drive a short way to park up and tackle Ling Fell.

This plan fell flat on its face when we arrived, parked up, and then went into the pub. We were about to choose a table and asked whether they were still doing food (“good food all day every day” is proclaimed outside). Sadly, they weren’t as they were setting up for a New Year’s Eve party later on, so were unable to rustle up a couple of sandwiches and a bowl of chips.

We waved a cheery goodbye, got back in the car, and then drove halfway back towards where we started from to find some lunch. Another attempt to support a local business thwarted…

We are back at the Royal Oak again, always a reliable pub. Tonight’s festivities began with a festive beer, a Thirst Nöel by Keswick Brewing Company, full of sweet maltiness and good with food.

O hai! Predictable guy! Yes, it’s the half roast chicken and chips again for me, and it’s nice to see it served on a plate this time rather than in the stupid wooden greenhouse tray that they used last time we were here. I think they are trying to go for a classier image instead of that hipster nonsense. The food was still very tasty, although I think the salad was nicer 18 months ago (although there could be some seasonality in that).

A nice pub with a nice atmosphere and always good food.

Another in the long line of “quick lunchtime posts”. We are out and about once more, exploring the fells around the Whinlatter forest. If you’re going to pay the Forestry Commission’s eye-watering car park charges (8 quid a day, hence the credit card machine attached to the parking meter) then you really need to spend as much time here as possible to get your money’s worth.

Too cold for a picnic on a day like today, so a spot of lunch was in order. There’s a good size cafe on site (tables outside for the warmer months too) and they are of course fully geared up for dealing with muddy walkers and mountain bikers, so muddy boots are no problem. They are open from 10-5 pretty much every day.

A decent selection of cafe style food on the menu, the usual sandwiches and panini, jacket potatoes, pies, quiches etc. 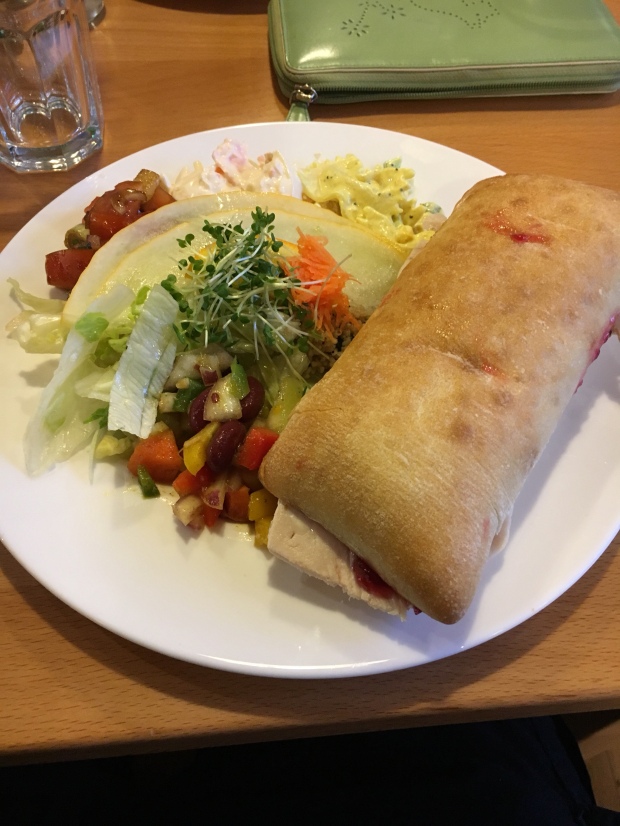 Mrs MOFAD had similar with her tuna mayo jacket potato:-

A great place to stop for some lunch, nicely priced and very well presented. Good service too. It’s nice that although they’ve got a captive audience they’ve made a lot of effort to do some decent food.

Yes, I’m predictable. Achari chicken again, the exact same thing that I had in June 2016 and June 2015 – I really like this dish. Chicken cooked in pickling spices and some limes (although there could always be more limes). A nice piquancy and a good consistency of sauce.

This went well with a Cloudwater DDH IPA Nelson Sauvin Galaxy (lots of Southern hemisphere hops) and some To Øl Frost Bite, brewed with orange peel and pine needles. Athough I didn’t get any orange just some hints of pine.

Another good meal from Lakeland spice – see you in the summer!

My Tweets
The Minister of Food and Drink
Blog at WordPress.com.