So here we are, back again with the day two round up. As 75% of our party aren’t big beer festival people, we spent much of the day cycling along the Monsal trail to earn our beer points, and it was a very pleasant day out, despite some more rain making an appearance. Little did we know that many beers were disappearing from the festival in our absence. Like yesterday when we arrived, there was nowhere in particular to park bicycles (our preferred mode of transport).

The rain and its effect on the conditions underfoot at the Bakewell Showground have been a big part of the weekend. The Bakewell Show suffered huge problems just a couple of weeks ago during some big storms, with some cars unable to enter or leave at various points due to the field being an absolute mudbath. The nearby Y Not festival was also abandoned on its final day. (Edit : the Bakewell Show has been cancelled for 2018, for the first time since World War II, one of the reasons given was to let the showground recover).

On to our beery round up for day two, and then some final thoughts.

First up in the round up, the Magic Rock pilsner we know as Dancing Bear, prety decent stuff.

Another treble next. There’s Melba, which you might have guessed is a peach beer, an IPA to be precise. The peach is very subtle, although the IPA bit is even more subtle (sadly).

A lovely summer beer followed, in the form of Wit or Wheatout You (strong punnage from Beavertown), a slightly soured wheat beer with coriander and lemon zest, to make the ultimate wheat beer shandy.

Staying with the lemony goodness, Siren’s White Tips “zesty IPA”. I had high hopes of this one, but there were just subtle zesty hints and no hops detected. Wit or Wheatout You was much better.

After some pizza (because beer festival), some more beer. Hawaii 5-Oh is a beer inspired by ham, and made for The Friends of Ham, a top notch beer, cheese and charcuterie bar in Leeds. I am also a friend of ham. It was quite literally like drinking a smoked Hawaiian pizza. This is a good thing in my book, probably my favourite “weird beer” of the event.

This next beer was another Thornbridge one, Guinevere, a witbier that was like a rosemary gin. Intriguing. 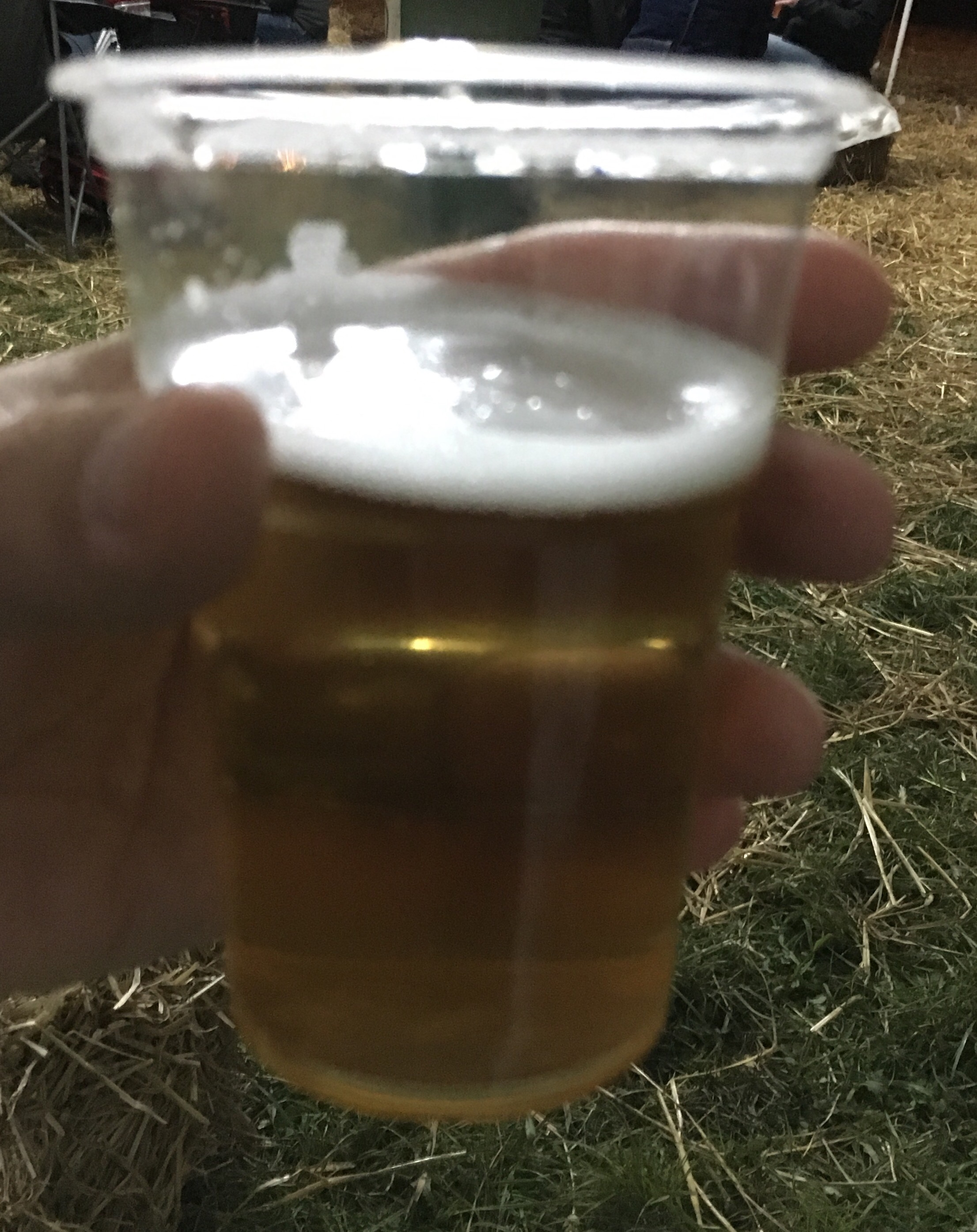 Thornbridge Lumford was not worth the long wait at the bar, way too bland for a New Zealand pale ale… 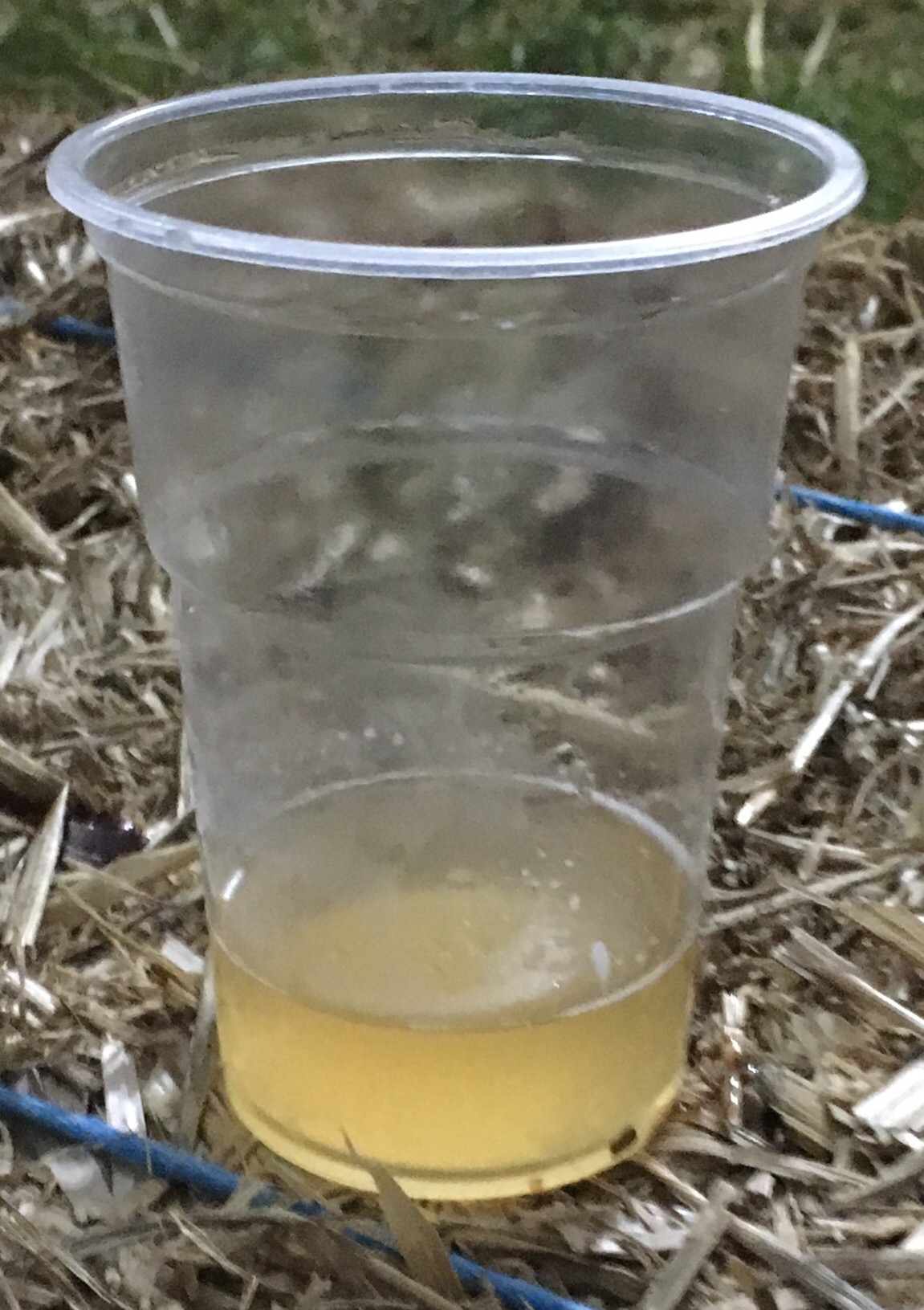 Brock was to be the final beer of this year’s adventure. And what an anti-climax. Thin and light and nothing of note. (Edit: having had it again in December 2017, it’s much better when it has been looked after by a skilled publican).

On to final thoughts. The weather played havoc here. Recent rains have ensured that quagmire conditions seen earlier in the month persisted in some areas. Temporary walkways weren’t up to the job, leaving more puddles in their wake. Bales of straw strewn everywhere are only good for a certain amount of footfall. That amount was soon exceeded, so there were more muddy patches. More bales of straw which were being used as seating were being ripped and tossed to the ground to try and shore things up.

Even with the expanded capacity that this area brings, queues for the bars (particularly during colder and wetter times in the evenings) still made things difficult. An outdoor summer beer festival should be an awesome thing (the first one in 2014 was just that). With a better summer next year, this could still become the best outdoor, free to get in, beer festival.

(Edit 1 : having chatted to one of the team at another event, further details of some of the difficulties they ran into when trying to organise the event emerged, and they certainly did well under difficult circumstances).

(Edit 2 : the 2018 event has just been announced. Following their own trend of charging for things that were previously free, the 2018 festival will cost you £8.25 per day to get in, or £22 for a 3 day pass. In exchange for your hard earned cash, you get precisely nothing. Since no-one from Thornbridge could explain the reasons behind the costs, you can only assume that it’s to help iron out some of the difficulties they ran into last year. I did advise them that they should put some explanation about why they need to charge on the FAQ pages, but they never did. We won’t be going. I hope you have a great time if you choose to go.)

How do you make a mess of the simple process of allowing a customer to order 2 cups of tea and 2 slices of cake? Alarmingly, it’s quite easy. Unlike most cafes, you decide to have two queues. One queue to order your food and drink. The other queue to pay for your order.

That shouldn’t really be enough to make a mess of things, it’s quite simple. However, if you really want to mess things up, don’t label these queues, and don’t make it obvious in any way whatsoever which queue is which. So when your unsuspecting customers arrive, they join a queue, get to the front (eventually, because it’s a busy Saturday afternoon), only to be told by the disinterested youth that they are in the wrong queue. So time to start it all over again.

A shame that this is how things started off (I swear they were utterly disorganised the last time that we were here too). The tea and cake were good, and they are so handily placed on the Monsal trail (and are always busy). They also hire bikes too, so they have a ready made captive audience. There are some decent things for sale in the shop, as well as the usual gift shop tat.

They just need to get a bit more organised.

A familiar pub, but all previous visits have been in pre-MOFAD days, so it is the first time that it features here. It’s kind of handily placed for cyclists on the Monsal Trail. I say kind of, because it’s really easy to get to from the trail, as it’s just a few minutes down hill. You can get a great view of the viaduct as you pass underneath it on the way down to the pub.

If you want to get back on the trail, you have to go back up that hill. Spoiler alert : I was the only one who cycled all the way back up, the others pushed. I cycle every day, which does give me a rather unfair advantage. It’s definitely a 1st gear hill though.

Our trip over from Bakewell was calculated to get here around lunchtime, and we did just that. The overcast conditions today were not conducive to sitting outside, so we grabbed a table in the bar area by the fire (not lit!)

The beer choice was a very easy one. A pint of Pale Rider from Kelham Island Brewery, a very tasty blonde ale. The gentle companion to Easy Rider, a pair of beers that we had quite a few of back in the Swan days… 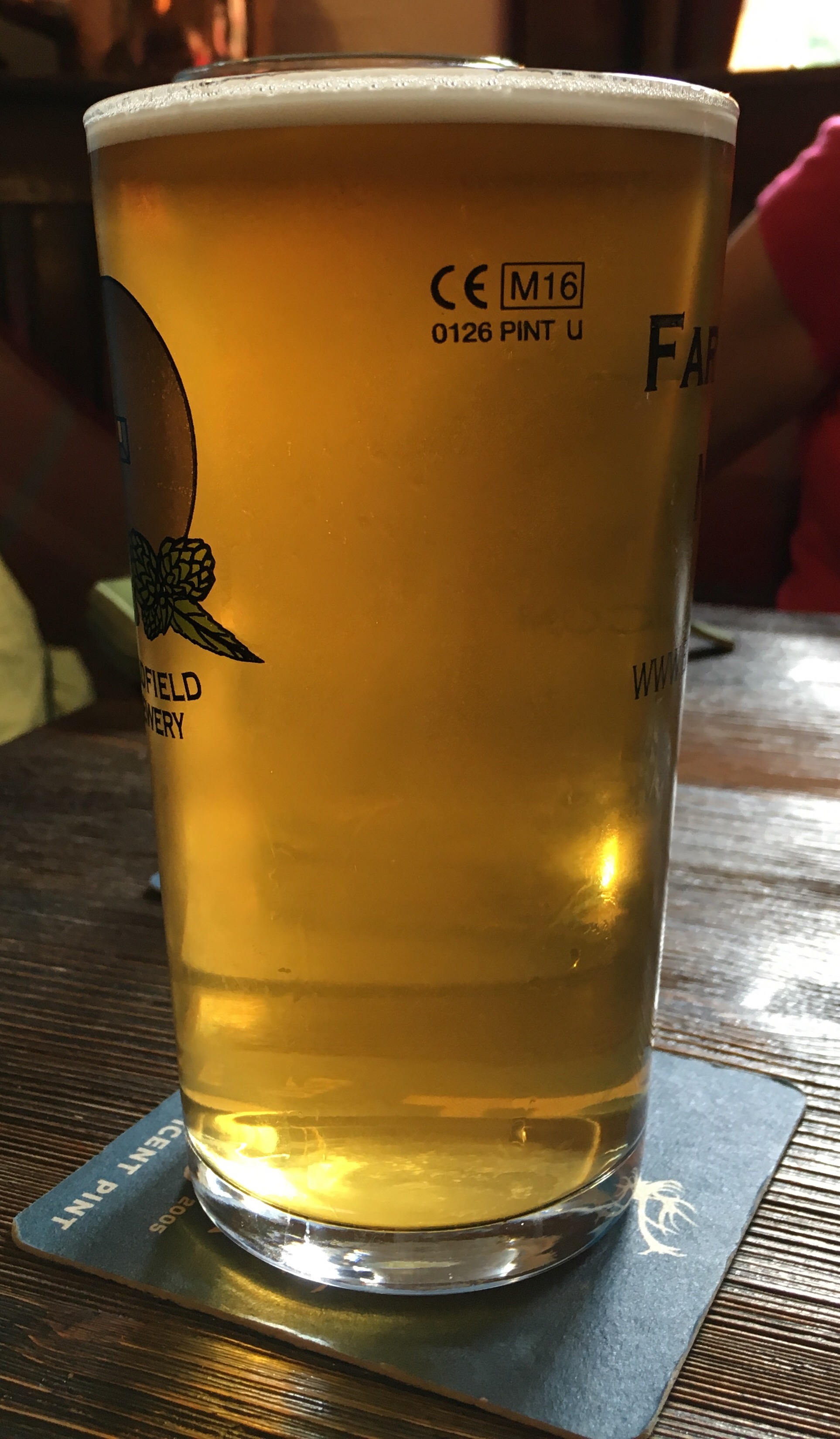 A classic pub should mean a pub classic, and a ploughmans is just that. This one was packed with classic ingredients. No need to choose from cheeses or ham, you get both. And half a pork pie as a bonus (you get quite a lot of these in a New Forest ploughmans, which is a good thing). Pickled onions, pickle, a warm, fresh roll, some more interesting leaves than just iceberg (still there though) and even a bit of beetroot. The slice of orange is less classic than some apple, but still welcome. 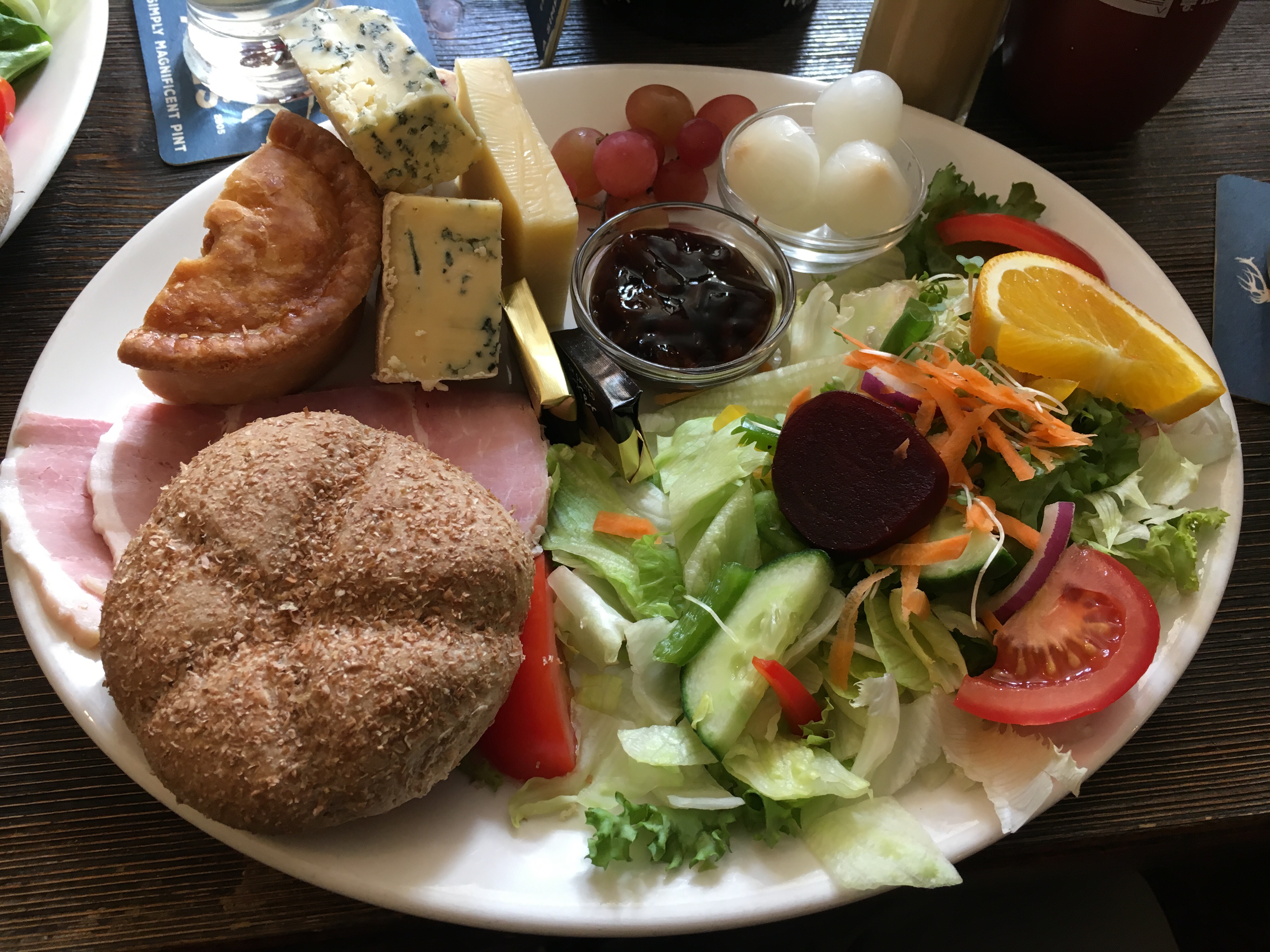 A lovely riverside pub (when it’s not raining outside) which does lovely food and keeps a good pint of beer. Well worth the effort of coming off (and getting back up to) the Monsal Trail. It is also a nice walk over from Tideswell (and back). Well worth a visit, and even better on a lovely sunny day. You might expect one of those in August, but not today…