That has been the over-riding theme of today. The forecast was very specific. Rain coming in around lunchtime. And not leaving until late evening. So we were up and out, off to bag another Wainwright. Very much a “there and back” walk, get up, get back down, and get back under cover until the rain passes.

After an afternoon of unceasing rain, we wondered if it would ever be dry again. When we arrived on Thursday, we had to pitch our awning in a swamp. The swamp had started to recede, but as the afternoon wore on, the swamp was back and bigger than ever. Squelch squelch. The only sensible option is to retire to the pub.

We did just that. After a good effort at finishing it up, the Eden Valley had gone, and was replaced by Ullswater Blonde, also from Eden Brewery. I’ve had this beer every year for the last three, and the current batch seems lighter in colour than previous brews. An easy drinking golden ale. 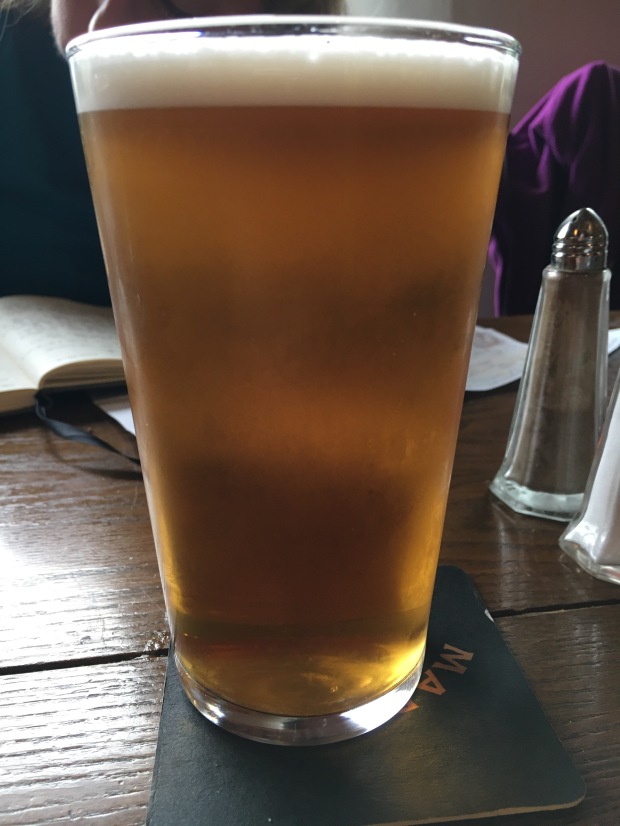 Food next, and after a cool and wet afternoon (if only we’d brought our radiator in August!) a warming bowl of smoked haddock chowder was just what was needed. A lovely mini loaf of bread accompanied it, but I wasn’t convinced about the salad. It doesn’t seem to fit with the creamy chowder (which was very nice).

And after plenty of properly plated meals, we have a double whammy of disappointment. A slate set into a bread board. Why, cruel fate, why? Why not just a plate?

Luckily, the plate was around for the pudding (often a prime candidate for a slate). This dark chocolate delight with raspberry ripple ice cream and a few raspberries was a lovely end to the meal, the richness of the chocolate being cut through by the raspberries.

Mrs MOFAD opted for the Cumbrian classic of sticky toffee pudding, which was sticky and delicious.

We’ve had lots of lovely meals at The Brotherswater Inn. When you are a captive campsite audience, it’s always a worry in case it doesn’t turn out to be very good, or there’s a limited menu. This was not the case. A lovely pub with lovely food and beer. Perfect for a campsite.