January has been rebranded #tryanuary, a reaction to all of this #dryjanuary nonsense, where people seem to think that you do lots of faddy things to “detox” yourself. You already contain things that detox you. Those things are called kidneys and a liver. Treat them with respect and they will look after you.

Let’s look at some of the best beers of #tryanuary then. We start with Frambuzi from Tiny Rebel Brewing Co, an Uzi 9mm full of sour raspberry flavours. Certainly no sweet “supermarket fruit beer” nonsense here.

Next up we visit Hampshire, for Vibrant Forest Summerlands, a golden summer session beer brewed exclusively with American hops to give a slight citrus character and a rich hop aroma. A relatively low ABV makes this a true golden session ale to enjoy whatever the weather.

They are not wrong. I’ve never had so much hoppiness in 3.5% – a cracking session beer, and even sweeter as it was a free sample for taking part in #CraftBeerHour

I wrote about “the limited edition crowdsourced beer experiments” of Cloudwater Brew Co back in August. I had DIPA v3 which turned out to be beer of the year, as well as v6 and v7 during 2016. I also collected v8, v9 and v10 in 2016, and v11 came out recently. From next month, the beer switches to cans, and v12 will be the first canned release.

So DIPA v8 makes the list for January, full of tropical dankness but very easy drinking. I’ve still not found one I like more than v3 yet.

Speaking of cans, we move on to one next, Storm In A Teacup by Wild Weather Ales. Over to Wild Weather for the blurb:-

Two things are loved the world over; a warm cup of tea and a cool glass of beer. And it’s with this worldwide love affair firmly in mind that we crafted this beer. Using hops from the US, New Zealand & Australia, tea inspired by China and the finest English malt. A true intercontinental behemoth. 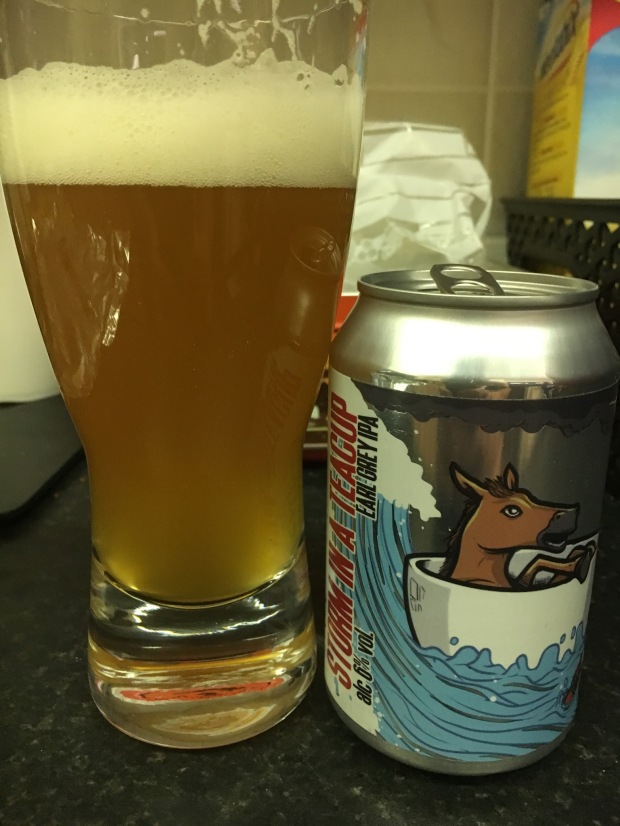 Across the North sea to Denmark, for Peter, Pale & Mary from Mikkeller, probably the most famous “cuckoo” brewery, as they don’t have their own brewery premises, but collaborate with other brewers to get their beers made. This particular brew has cracking hoppy flavours and is definitely my kind of pale ale. Sessionable goodness. Yes please!

We return to Manchester and Cloudwater Brew Co for our winner, the snappily titled, Autumn + Winter IPA Mosaic Exp 431, which is described as “a dank, juicy, hoppy IPA featuring Mosaic, E431 and Vic’s Secret hops and fruity esters from WLP4000 yeast.”

It is indeed stuffed full of dank hoppiness, absolutely delicious stuff, very much my favourite beer this month, even though the others in the list have been very good.

The first candidate for beer of the year 2017!