Can’t beat that British classic of fish’n’chips. After another nice walk today, we were ready for a takeaway, which we’d decided on last night after winning the pub quiz at the Talbot Arms.

I’m not going to win any awards for presentation, but my approach to fish’n’chips is to get it on the plate and get it in my belly.

A lovely plate of fish’n’chips, nice piece of cod and good chips. Mrs MOFAD’s quest for a Yorkshire fishcake was thwarted once more. They do sell them at The Shambles, but as we are reaching the end of the “old potato” season and crossing into new potato territory, they don’t have enough decent sized potatoes to make Yorkshire fishcakes (a piece of fish between slices of potato). They also have pies, pizzas and burgers on the menu, so it was a chicken & mushroom pie for Mrs MOFAD tonight. 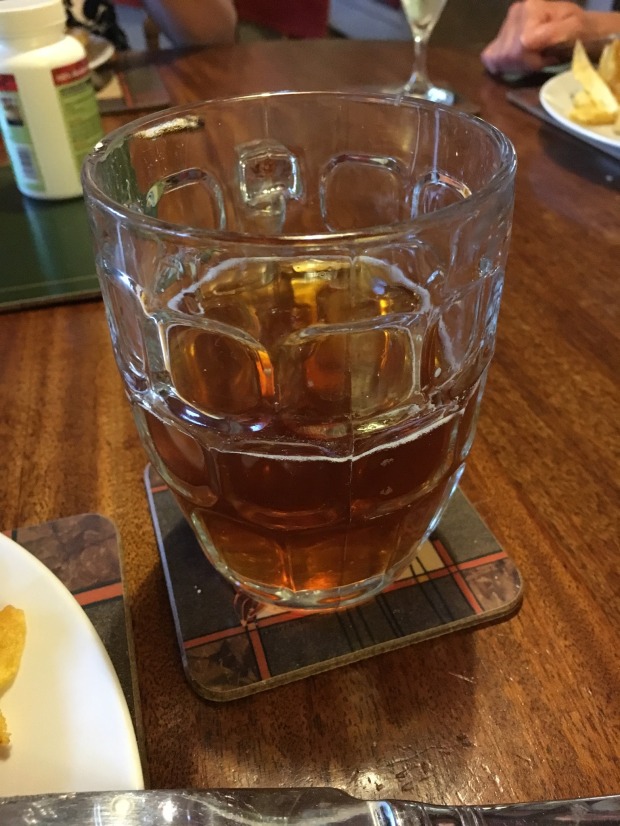 This was all washed down with winnings from last night’s pub quiz, several tasty pints in takeaway cartons. Great fish’n’chips (and a chip butty of course) and great beer. A perfect evening in!

The Craven Heifer, after which several pubs around these parts are named, was a cow bred (and continuously fed) by the Reverend William Carr in 1807 on the Duke of Devonshire’s estate in Craven. She weighed 312 stone (almost 2,000kg) and measured 11 feet 4 inches long (3.4m). This heifer has held the record for being the heaviest cow in Britain for over 200 years. That is one big unit.

This particular Craven Heifer is in the village of Stainforth, well signposted from the main road. We arrived just after 2pm, after the first part of our walk over from Helwith Bridge took a little longer than planned. Although they had officially stopped serving food at 2pm, they did offer us the cold sandwich menu to choose from. We ordered some sandwiches and drinks and went out to the beer patio to enjoy the May sunshine – the first al fresco dining this year (in this hemisphere at least!)

A Thwaites pub usually means a good pint of Wainwright golden ale, and this was no exception:-

We enjoyed watching and listening to some wildlife on the river down below, and had a bit of a rest in the sunshine until our sandwiches arrived. They were very nice, but I was rather expecting something more than 2 slices of Warburtons with which to enclose my nice tender roast beef. A nice little salad on the side, although the mustard dressing was pretty strong (it would have been better in the sandwich than the horseradish).

A nice little stop on our walk, maybe next time we’ll get there in time to sample the other options on the menu!