Another moist day out on the fells. We had trusted the optimistic Accuweather over the pessimistic BBC, and it was ok for about an hour. But then the rain came. And didn’t stop. So we decided to cut our walk around Kentmere short, and head straight for the pub instead.

And what a good decision that was. What a good pub. As you would hope for a brewery tap. Let’s deal with the history bit first.

Hawkshead Brewery started life in 2002, just outside Hawkshead where they could brew around 8,500 pints of beer a week. In 2006 they moved over to Staveley, where they have been expanding ever since, increasing their brewing capacity and developing the very brewery tap that we were visiting, The Beer Hall. This involved building a new bar around two 11,000 litre stainless steel tanks which rise up through the first floor, and dominate the upstairs dining area. This means that they can now knock out over 60,000 pints a week. That’s some expansion.

What this means for you the customer is that there are loads of beers on tap for you to sample and then order to go with your lunch. There were at least 10 on today, as well as lots more bottles to choose from. More on that story later.

We had a few tastes before deciding on what to order. I liked the Great White, a cracking wheat beer with spicy notes and a cheeky NZ hop coming through. We settled on (from left to right) a Dry Stone Stout (dry and smoky, easy drinking), a Solar Sour (Mrs MOFAD’s new favourite – a supreme session sour, which are not words you generally see together), and a Sundown (say hello to my hoppy friend – cascade, simcoe and citra hops, super tropical nose, bitterness and sweetness on the palate).

Lots of lovely beer should be accompanied by lots of lovely food. And it was. We opted for the “Brewer’s lunch”, an interesting take on a ploughmans. This consists of lots of lovely bits and pieces, huntsman’s pie (pork, chicken and stuffing), Brodie’s Prime sausages (made with the beer of that name), parma ham, slices of local ham, black pudding (this is the north after all), sticky bbq ribs, a pickled onion, piccalilli, salad, sourdough bread and butter. We also ordered a bowl of fries to accompany this delicious selection. 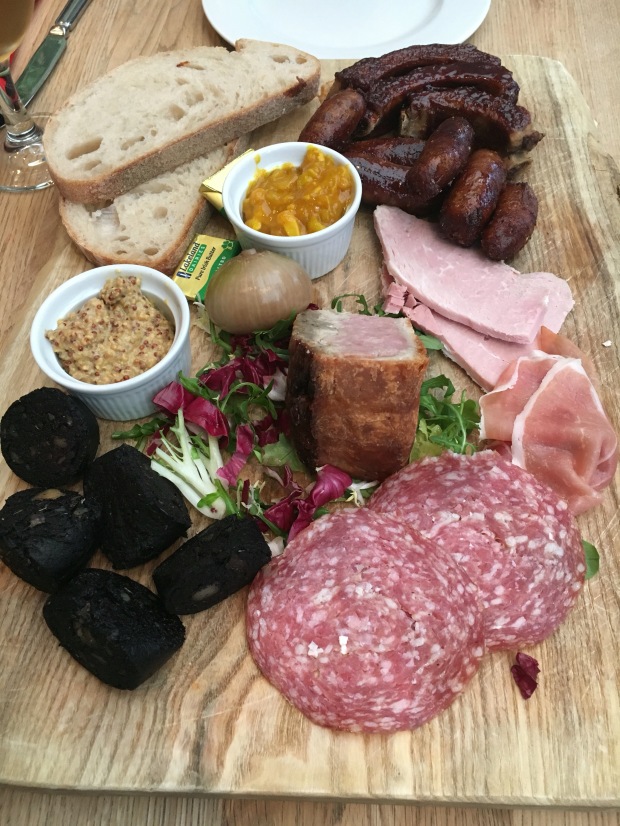 A note about mustard. In England, if your dish is advertised as coming “with mustard”, like this one was, it should be accompanied by a pot of freshly made English mustard, made from finely ground mustard powder. It should not come with some grainy generic mustard. Luckily, some sachets of decent mustard were available so the seedy stuff was left alone. Despite this minor mustard mishap, a lovely lunch indeed.

If that’s not enough, downstairs you can do some shopping. There’s a range of clothing, bags, mugs etc. But more importantly there is a full range of bottled beer available, including almost all of the Hawkshead products (some are also available in the nearby large supermarket) as well as some rare collaborations and foreign imports from Belgium and the USA. This excellent selection should definitely help with #tryanuary

The Beer Hall is most certainly MOFAD approved, looking forward to a return visit!