This is a round up of breweries and brewery taps visited in 2015. There were quite a few visits, and many camping trips ended with bringing home a box or two of bottled beer. So this is my brewery (outlet) of 2015, based on those visited, not based on their output alone.

The first honourable mention based on output goes to Settle Brewing Company (I had five of their beers during and after our visit to Settle). Yes, it was a camping trip.

Wincle Brewery, from Cheshire, were also another I came across on our travels, taking home a mixed case of their beers from Bakewell Farmers Market back in July 2015. I’ve had 6 of their beers, with one more still in stock. The Old Hag and Old Oak are particularly tasty.

Finally in the honourable mention category we have Two Cocks brewery (hello people who’ve arrived at this post from those keywords in search of bifurcation action). I met these nice chaps at Blenheim Palace food fair, finding out all about their story (they appeared on Grand Designs) and returning home with a mixed case of all seven of their beers. Their 1643 Puritan Stout and 1643 Leveller bitter were particular highlights, but all of the beers were very good.

Whatever you do, don’t Google for them. Use this link instead:-

So, on to breweries and outlets visited. I’ve not done the tours (if they were available). I kind of know how beer is made, so I’m not really interested in the mechanics, just the end product.

We visited Hook Norton back in July 2015. Not the first time that we’ve visited this brewery either, as we popped in on a previous camping trip a few years ago.

After you make your way down the little narrow lane that leads to the brewery, you get to a little car park out the back, and then step into the visitor centre/shop/tasting room. From here you can go on brewery tours, or just wander around the little museum, or buy stuff, or any combination of these things. The “stuff” you can buy includes lots of merchandise, as well as local foods and the all important beer.

As you can see, I departed with plenty of that, 15 bottles for less than £30, with something for everyone’s tastes, from mild to IPA via rye beer and stout.

Just a couple of weeks later, Billericay Brewery was the next destination. Once again, we were camping just down the road, and needed somewhere to stock up on vital supplies. Billericay Brewery have just the thing, with their shop and “micropub” – this has that “someone’s front room” feel about it. A few tables dotted about, a small bar, a couple of fridges, and several shelving units full of beer. And a friendly welcome too.

Sadly we didn’t have time to stop and sample a few pints, but instead we filled several boxes between us, with pretty much the full Billericay Brewery range, plus a few from neighbours Brentwood Brewery, some other London brews and a couple of Belgian fruity numbers. It was a lovely little place, and well worth a visit if you’re in the area. I’ve had 7 of their ales, with the Dead Zeppelin and Mild With No Name being highlights.

Just a few days later we found ourselves at Adnams Cellar & Kitchen in Southwold. Coincidence or careful planning? By now, you’ve probably worked out that it’s careful planning!

Adnams are big. They have a massive site in the centre of Southwold. As you might expect, they have a nice selection of local food, and of course a selection of Adnams ales as well as an interesting range of non-alcoholic drinks…

The food was very tasty:-

And we stocked up on plenty of local ales as well as some imports from Lagunitas and also some Aspall’s cider. Apparently I’ve now sampled 20 different Adnams ales, some of the favourites from this visit were Jack Brand Mosaic Pale and Tally-Ho!

Our penultimate brewery for this round up is Box Steam Brewery. Guess what? We were camping nearby, so popped over on this warm Friday afternoon (sadly they aren’t open on weekends) to pick up a selection of beers for the weekend, and a few for later. We had a good chat with the friendly lady in the shop and left with a few cases of beer, many of which are pictured in this slightly blurry photo of my haul from the weekend:- 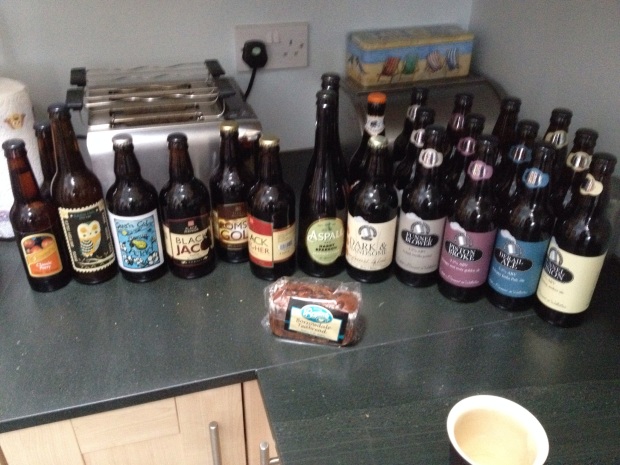 The beers from Box Steam were consistently very good, with the Funnel Blower porter being light and drinkable, and the nicely hoppy Derail Ale IPA being a particular highlight.

And so we come to our winner, Buxton Tap House. Yet again, we were camping in the area, and with the changeable forecast for the day, we decided on a trip into Buxton for a wander around, with a suitable lunch stop required. There was only one choice, the place that sells some of my favourite beer.

I’m a fan of their beers, and I’d heard that they do good food. I was right. We wandered in around 1pm and managed to find a table. On Sunday lunchtimes, they serve full roasts, or just a roast in a bap, with roast potatoes, parsnips and gravy. This was a perfect choice for all of us and it tasted as good as it looked. Very nice beef, a good and hot horseradish, good spuds and a really tasty gravy (if no-one else had been watching, I would have downed that too)…

Several beers were sampled during the visit,  a Moor Top, a lovely mixture of floral hoppy bitterness. And then some more bitterness. American Chinook hops and a hit of grapefruit. A great session pale. This was followed by a Wild Boar, another floral and hoppy ale, this time with hints of mango. Very good indeed.

Jaw Gate, an American IPA made with NZ hops was the final one of the visit. Now, I’m very picky when it comes to IPA, because so many (this one included) do not understand that the P stands for PALE. Apart from the lack of paleness, it’s very good indeed, another one that you could drink all day.

A quick stop at the bar on the way out, to buy a nice little selection to take away. These lovely people will also let you taste a few more if you’re trying to make up your mind, so there was an opportunity to have some Pic Tor, a passion fruit sour which was pretty amazing. It’s probably my second favourite Buxton beer.

It’s fair to say that the Buxton Tap House is my brewery outlet of the year. Find out more at http://www.buxtonbrewery.co.uk/tap/