It’s Christmas party season! That means a few opportunities to check out some new venues and look out for interesting Xmas meals. Tonight it was the turn of Mrs MOFAD’s work do, which this year was at the National Space Centre in Leicester. Not perhaps the most obvious choice, but hopefully a better choice than last year, a bland affair at a city centre hotel, which was over filled with people and poorly catered.

The National Space Centre opened in June 2001 (we remember when it was all just fields) and is an excellent local attraction, the UK’s largest visitor attraction dedicated to space.

It has hosted a lot of obvious space-related events with “stars” such as Buzz Aldrin and Helen Sharman, but it is also a venue for conferences, weddings and parties. And so we find ourselves here 🙂

A temporary bar was erected near the entrance, and there was a good selection of drinks on (particularly for a “pop up” bar) including bottled ale and cider, as well as some wines and cocktails (including one called “Red Dwarf”).

They also have an excellent way of signalling that it’s time to enter the main “arena” for dinner. Just near the entrance there is the bottom section of a rocket. And to get your attention, they “fire” this rocket, by spewing lots of “fake smoke” out of it. This rather startled the young lady who was standing underneath it at the time.

So into the main exhibition area we go, through a fake snowstorm and some twinkly lights (they’ve made a bit of an effort) and then sit down to dinner. A dinner chosen months ago, as is often the way with pre-booked Xmas parties. But I trust my judgement.

It got off to a good start, with this beetroot-cured smoked salmon, salmon mousse and a mini-slaw. It was very tasty and a nice starter. 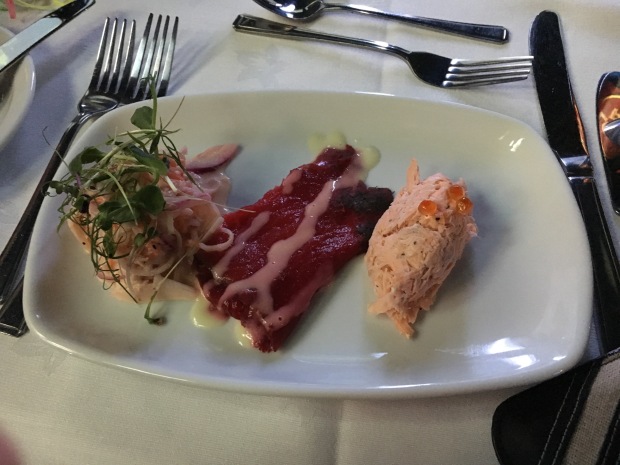 On to the main event. Chicken was my choice (keeping away from the turkey to avoid “turkey fatigue”) and it was nicely cooked, with a nice creamy onion gravy and the usual selection of veg. Mass catering is hard to get right, and this was a good effort.

Finally on to pudding, a nice little white chocolate cheesecake with a shortbread star, a swirl of coulis and a nice sharp raspberry. It was very tasty, and I even managed a bonus portion, encouraged by fellow diners 🙂

One final note, and that’s for the band, Funk Soul Brother, who were our entertainers for the night. They were fantastic, an excellent blend of tunes, with some funked up versions of popular classics, as well as the obvious choices such as Chic and Queen. Great entertainers.

#xmasinspace was certainly a great night out – if you’re looking for a Christmas party venue for 2016 then it’s definitely worth a look. If all that wasn’t enough, you can also wander around lots of areas of the Space Centre and interact with various exhibits, such as driving a remote control Mars rover…