A busy day today. This morning we were at a film festival, this afternoon we have a shopping spree lined up, then back home for a fireworks display and a Chinese takeaway. But first a (reasonably) leisurely lunch.

Conveniently located near to Highcross in Leicester (I’ll stop calling it The Shires one day), Cosy Club is a reasonably new venture (it opened last year). Using the premises of a former knitwear factory (lots of those in the area) they have kept much of the industrial look and feel (giant reels of cotton in the bar, exposed girders and huge windows), whilst adding some modern twists.

Being a former factory, it’s pretty large inside, with room for around 200 people in total. It’s part of a chain, and there are 12 currently, so you might find one near you. Their tagline is “think gents club meets village hall meets cricket pavilion.”

So, on to today’s visit. Shopping is hard work, so fortification is important. A pint of Inclined Plane, from the Langton brewery, did the trick. Originally brewed for a beer festival and named after the Foxton Locks boat lift, this beer became so popular that they kept it on as a regular brew. A straw coloured bitter with a citrus nose and nice hoppy taste, it was a perfect lunchtime pint.

Just to prove that it really is a serious business, even Mrs MOFAD was having a drink (not one for lunchtime imbibing usually). This Cornish Orchards blush cider was full of tart raspberries, very nice indeed. 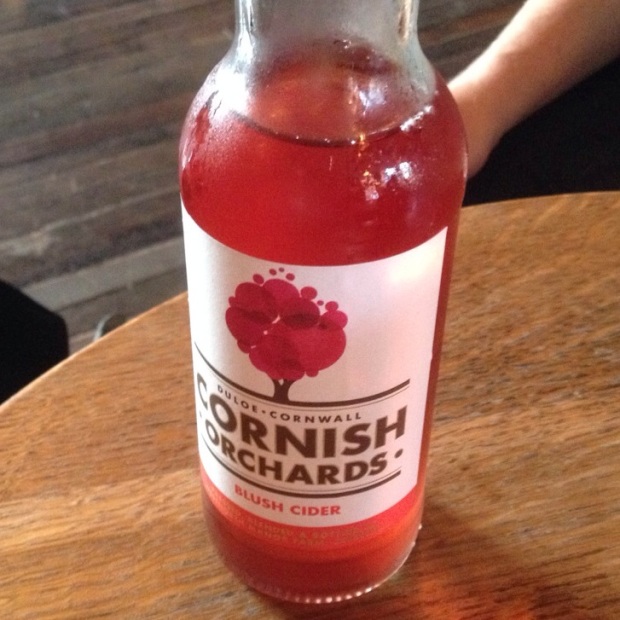 So when you see it in somewhere other than those purveyors of poultry, it is something you wonder about. But Buttermilk Fried Chicken with triple-cooked chips, chipotle mayo and house slaw always sounds tempting to me. As I didn’t grow up somewhere where this dish is associated with, I have no idea if this is “authentic” or not, but it feels pretty authentic to me. Recipes that use buttermilk will tell you that its acid content tenderises the chicken, and that certainly was the case here, very moist chicken with a nice crispy coating.

The triple cooked chips were fantastic, as was the chipotle mayo (be careful with it if you are not a big spice fan, it has a nice warm kick to it). I liked the slaw too, although it was a touch heavy on the onion. The trend nowadays seems to be that slaw (aka red slaw) represents a dish with either a light vinaigrette or no dressing and coleslaw (aka white slaw) comes with mayonnaise. 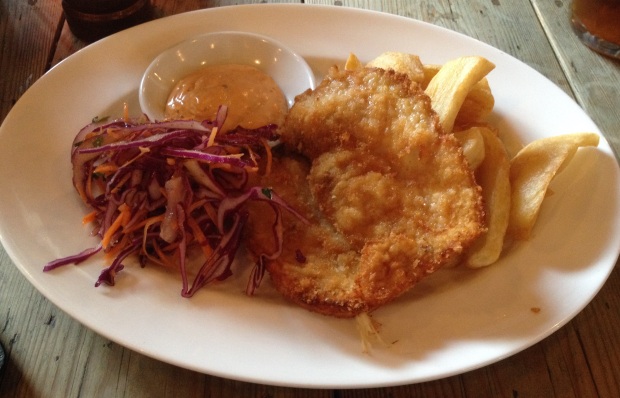