The Palace Hotel is a pretty famous Manchester hotel, even though it’s only been a hotel for 19 years. 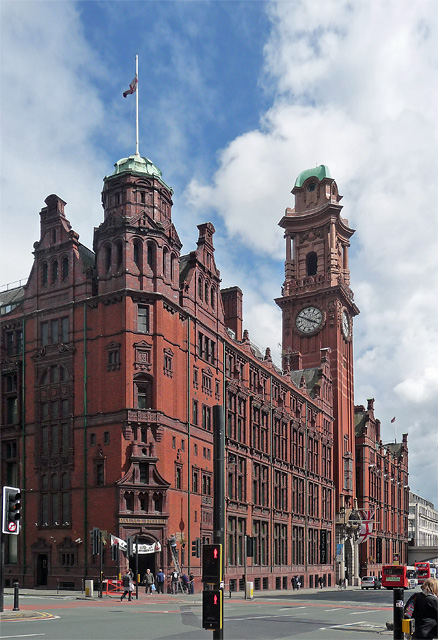 The former offices of the Refuge Assurance Company were converted into a hotel in 1996 at a cost of around 7 million pounds, and it is a popular venue in the city centre. I was in the city for a conference, and our conference dinner was to be held here for the second time. We had previously visited Manchester Town Hall, which was also an impressive venue.

First up some fizzy stuff with some orange juice in. Nothing special really.

Next, the slightly blurry starter – a poor photo from me, but I was trying to concentrate on talking to friends rather than award winning culinary photography. This was a tasty mini tart with a tomato chutney and a few salad leaves.

Next up, the main course. And a departure for mass catering – duck instead of chicken, with some red cabbage and mash. Again, this was nothing other than ok.

A brief interlude. We had a few bits and pieces on the tables in order to make and design some hats. This would earn additional wine for a few tables. My creative effort…

And finally, the dessert. Served on a roof tile! Stop it! With added cheffy squiggle. This was a bit overcooked and stodgy. And the crumbs went everywhere. This was then followed by very burnt coffee.

So overall, there was nothing that impressive. An average conference dinner venue. I think Krobar has been my favourite Manchester venue on this trip. After dinner, we headed off to The Paramount for a more flavoursome drink.