2014 was the year I began using Untappd, a web site and app that allows you to keep track of the beers and ciders you have been drinking.

I have tasted exactly 450 different beers and ciders from 16 different countries this year. With over 250 from the UK. It’s been a year for sampling lots of different beers, from the Ludlow ale trail back in September, the brilliant Thornbridge beer festival in July (far too many to list), as well as a couple of excellent tasting sessions during the 40th birthday Oz Odyssey, including the excellent 4 Pines Brewery in Manly and the beers at Ekhidna McLaren Vale.

Other highlights were Black Ops Imperial Stout by Salopian Brewery as well as their Automaton IPA. Another top IPA (my favourite style) was Upheaval IPA by Widmer Brothers, Star of Eastbourne from Harvey’s was also full of hoppy goodness, their Armada Ale was another hoppy winner as was the subtle smokiness of Bonfire Boy. More hops were to be found in 13 Guns from Thwaites and Weird Beard’s “Holy Hoppin’ Hell Part 4”. Prancing Pony Pale Ale was another down under discovery, as was Bridge Road’s Bling Bling IPA and Feral Brewing’s Hop Hog.

Several good Springhead beers were sampled when we camped nearby to the brewery and visited the brewery tap for a couple of meals. So many more that I could write about, but lots more to be getting on with.

New Year’s Eve has a few simple traditions for us. One of those is a takeaway. This started back in about 2001 and has continued pretty much every year since. For most years, this has involved a Chinese takeaway from Jade Garden, but after a few uninspiring efforts, and even finding it closed one year, we have switched allegiance to Thailand.

Perhaps surprisingly for such a small village, Ambleside has two Thai restaurants, but one (Doi Intanon) is often closed over the festive period. Despite visiting Ambleside countless times, we’ve never visited Doi.

However, we have now had a few good meals from Jintana, so it is our Thai of choice for New Year’s Eve. I have become very predictable at Thai restaurants. I almost always go for the predictable starter of chicken satay with peanut chilli sauce and a mussaman curry, usually beef. Tonight, slightly different, the chicken version:- 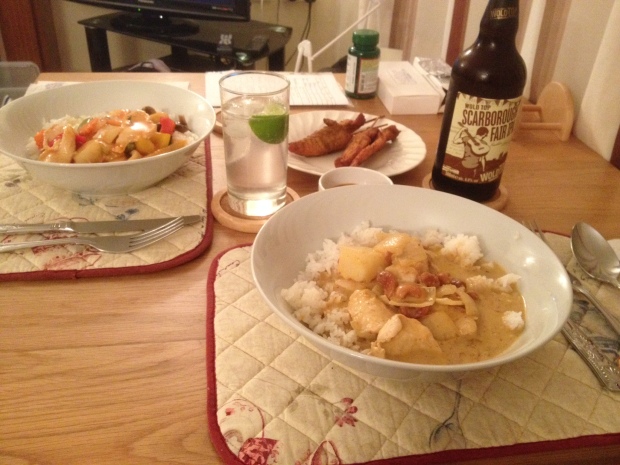 The mussaman is probably one of the most consistent curries across different venues, with meat, potato, carrot, onion and peanuts almost always present. Jintana’s mussaman is a good one. The accompanying Scarborough Fair IPA was a distinct let down. I like a big hoppy IPA to go with my curry. I also tried a Broughton Ales Merlin’s Ale, “a pale, mystical hoppy brew”. The mystery is where the hops were, because they seemed to have been magically removed from this beer. Approval for Jintana, NMH (needs more hops) for both beers…

This one is a bit of an unfair fight. Occasionally you get to sample some things that are almost other worldly. Back on the 8th of December, we held our own mini beer festival featuring a selection of bottled dark ales. And in amongst this selection there were two editions of Thomas Hardy’s Ale.

It was of the most beautiful colour that the eye of an artist in beer could desire; full in body, yet brisk as a volcano; piquant, yet without a twang; luminous as an autumn sunset; free from streakiness of taste, but, finally, rather heady.

The refurbishment of the Trumpet Major pub in Dorchester was the catalyst for Thomas Hardy’s Ale. 1968 saw the 40th anniversary of the author’s death and what better way to commemorate it than by attempting to bring fiction to life and creating this ale that Hardy had imagined.

This was to be no ordinary beer. Matured in oak sherry casks for nine months and corked in decorative pint and half pint bottles. It was brewed to 12% and bottle conditioned. A new legend began, and bottles were laid down with the expectation of improvement as the beer matured.

Hardy’s Ale was not produced again until 1974 but with the exception of 1976 appeared annually after that until the final vintage of 1999. Then Hanlon’s took on production from 2003 to 2009 but stopped because it was too expensive and time consuming.

Luckily, fellow imbiber Bruce had managed to source a few bottles of this almost mythical beer. And tonight was the night for sampling… 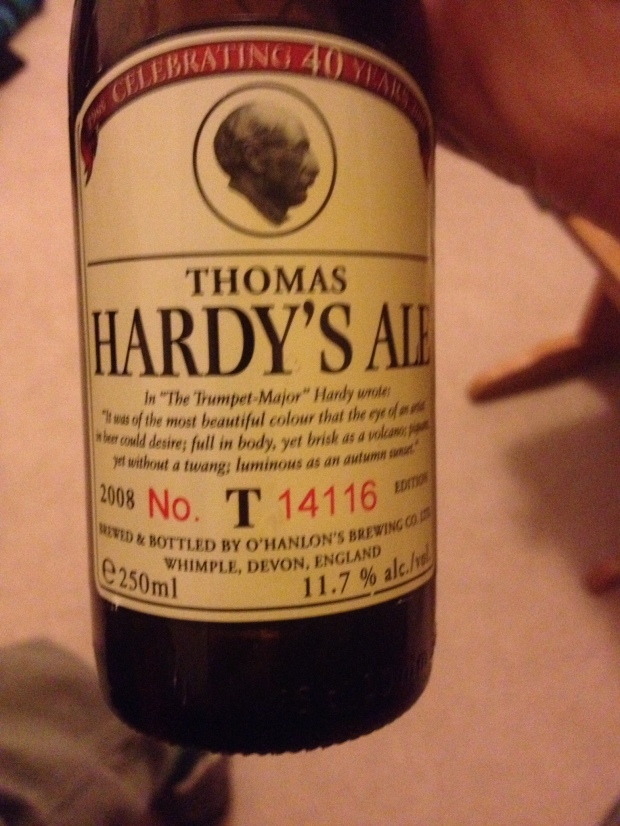 A whiff of Marmite on the nose, this is dark and delicious and pretty special. 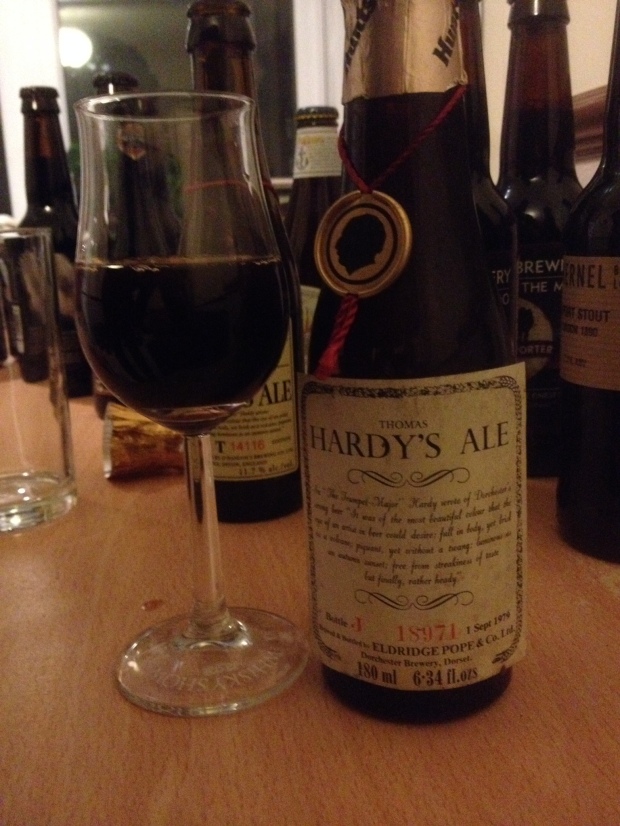 Another wow moment. Still that whiff of Marmite on the nose, and hints of coffee and port. This was clearly the outstanding beer of the month, and the year. But definitely an unfair fight. How can you beat something that’s been bobbing around for 25 years?

So, in the interests of balance, and as this is a special case, the beer that would have won otherwise was another dark slice of deliciousness, a Black Ops Imperial Stout by Salopian Brewery. Big coffee flavours, big chocolate flavours, big hop flavours and black, black, black. In any other month this would have been a clear winner, but Thomas took the prize.

New Year’s Eve, and another walk. This time from Wray Castle (thank god for National Trust membership because the car park costs have gone from free to astronomical in just 12 months) over to Outgate and back. This is a walk we’ve done a few times, and we’ve stopped at the Outgate Inn for lunch before too. The Outgate is a Robinson’s pub, so you can always expect a couple of decent ales to be on. Today my choice was a Robinsons Indulgence – a good malty ale, and a perfect by a roaring fire after a morning of walking:-

There is always a good choice on the menu, from home made sandwiches to light bites and bigger meals. I plumped for a roast beef sandwich (very nice) which comes with a nice salad, chutney, pickled onions and root vegetable crisps. We also ordered a bowl of chips, a classic pub chip and the perfect accompaniment to a sandwich on a cool day:-

The Outgate is walker friendly, dog friendly, muddy boot friendly and lovely place to stop for lunch on a walk. Because of its location, it is not always rammed, but that’s a good thing as you should always be able to get a table and get some lunch! MOFAD approved!

Hang on! Weren’t we here just a couple of days ago? Yes, we were. But it was very good, and we had another walk on the other side of the valley that would take us back here. Who were we to refuse such an opportunity?

The cider festival was still on, which gave Mrs MOFAD an opportunity to have Cherry Perry from Lilly’s Cider – my only comment was “ewwwwwwwwwwwwwwwwwww”. I opted for the Sally Birkett’s Ale, which is only available here – an historic session ale indeed.

And there was no real dilemma about what to eat – the club sandwich again!

Another approval for The Mortal Man!

After an icy and sunny trip over Loughrigg Fell today, and after that nice lunch at the Badger Bar, it was another trip out to find some dinner. Tonight, the White Lion was our destination, an Ember Inns chain pub that we’ve been to a few times before. It’s always very busy, but you can usually grab yourself a table.

Tonight’s beverages inlucded a McEwan’s Signature, which was malty but nothing special:- 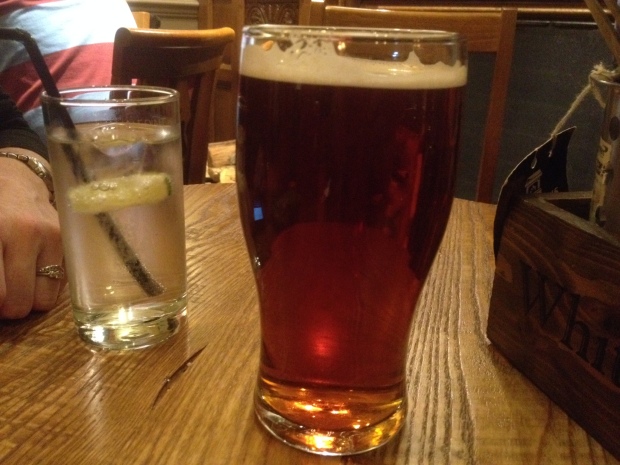 and a Copper Dragon Golden Pippin – I acutally wanted Winter Lightning but it was not ready, this was an ok golden ale that I’ve had once or twice before:-

Triple pork nirvana was achieved once more and for pudding, that Lakeland classic, sticky toffee pudding:- 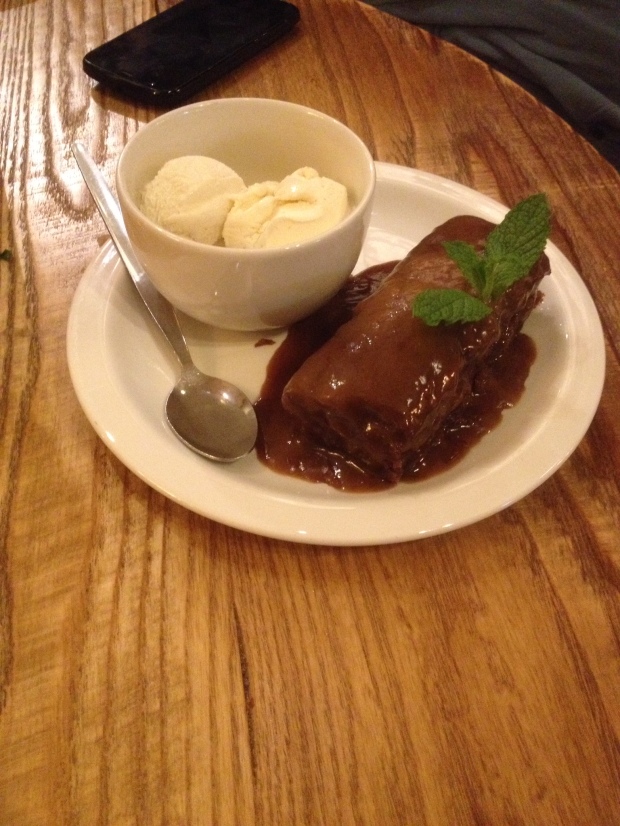 The White Lion is MOFAD approved, ideal for a quick meal in a busy village, and a chain pub that works well.

The Badger Bar has been on many of our Lake District walks, but never in the right place! It has usually been at the beginning or the end, never in the middle. This changed today, with a walk planned that put it firmly in the right place for a lunch stop. It is very definitely walker friendly and was crammed full of many such types (including us). There is a good choice of food, including an all day bar menu and a sandwich menu (served 12-3 each day). We ordered some food (another club sandwich for me and a bowl of chips on the side) and then had a drink or two to accompany it. First up was a pint of Detention from Old School Brewery, a good blonde ale:- 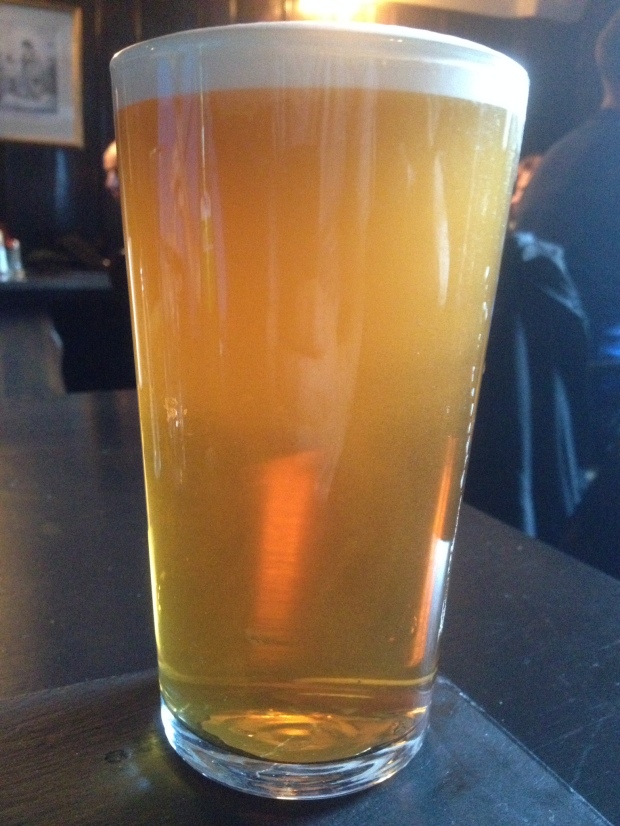 To accompany the club sandwich, a pint of Barngates Cat Nap – dry and hoppy, and very good:-

For all you hungry walkers, the Badger Bar is definitely MOFAD approved!

My Tweets
The Minister of Food and Drink
Blog at WordPress.com.